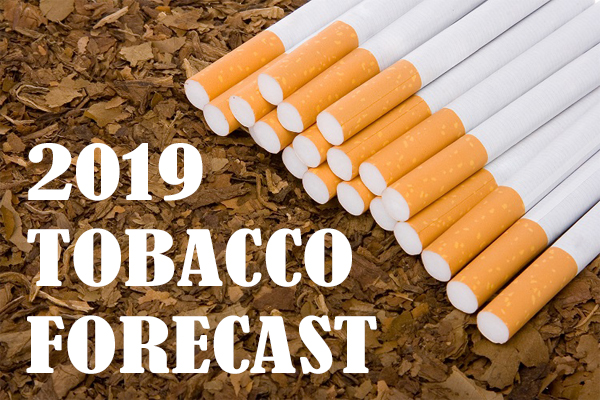 A forecast of the Tobacco Industry for 2019.

More states contemplate an age minimum of 21 for cigarette purchases, while others consider cigarette tax increases.

Last month, Hawaii State Rep. Richard Creagan presented a bill to raise the statewide cigarette minimum purchasing age from 21 to 30 by next year.

His proposal also planned to raise the minimum multiple times over the next several years—40 in 2021, 60 in 2023 and finally 100 in 2024. The bill doesn’t apply to e-cigarettes, cigars or smokeless tobacco.

The continued regulatory crackdown on cigarettes sales is affecting both Hawaii retailers and the convenience industry as a whole.

“We thought it was an unusual bill. It’s the first time we’ve seen a bill like this,” said Neil Ishida, director of employee relations and government affairs for ABC Stores. The convenience store company operates 77 sites on the islands of Kauai, Maui, Oahu and Hawaii.

The aggressive approach in this particular bill grabbed headlines, but many in the tobacco and convenience store industries doubted it had much of a chance to survive the process. 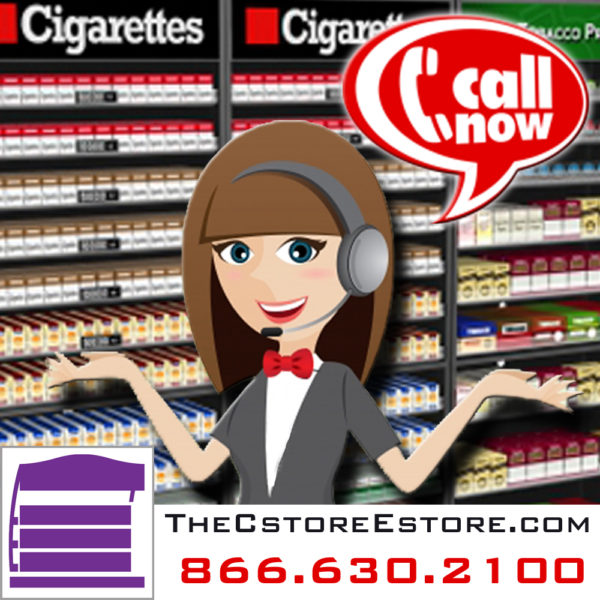 States lawmakers across the country hope to raise taxes, too. For example, Indiana lawmakers put forth two bills: HB 1551 would add $1 per pack and raise the legal purchase age to 21; HB 1565 leaves the minimum age, but levies a $2-per-pack tax. Wyoming officials are debating a $1 increase and Vermont is weighing a new $1.25 tax.

According to IBISWorld, cigarettes, including menthol, account for more than 71% of the U.S. tobacco wholesale market, but retail volumes keep falling.

According to IBISWorld, cigarettes, including menthol, account for more than 71% of the U.S. tobacco wholesale market, but retail volumes keep falling. Each top brand registered year-over-year unit sales losses for both the 12- and 52-week periods ending Jan. 12, 2019 per Nielsen data reported by Wells Fargo Securities. Natural American Spirit was the only brand to post positive numbers. Even price increases, from 1.5% to as much as 6.7% for the same periods, couldn’t compensate, and most Big Tobacco brands earned less in dollar shares. 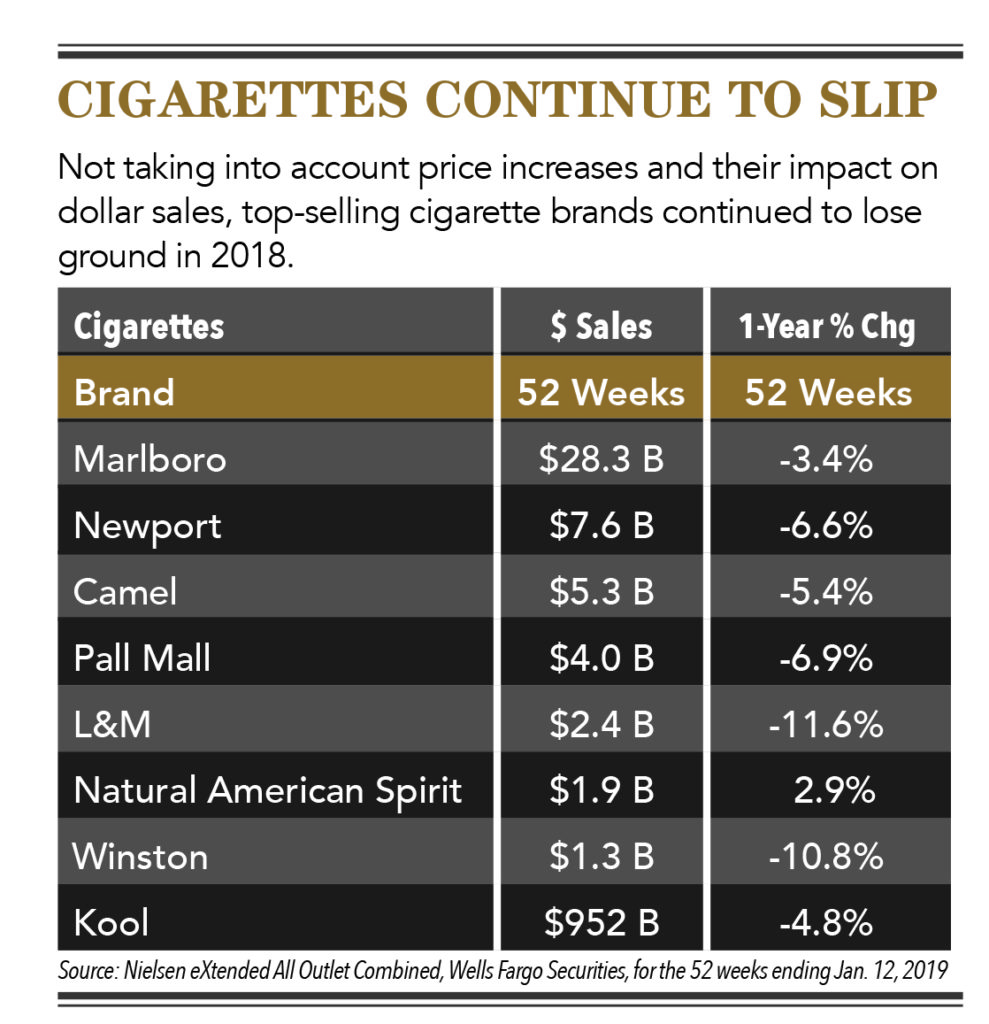 “Cigarette manufacturers realize almost three times the leverage on earnings from a point of pricing than a point of volume,” said Bonnie Herzog, senior analyst for Wells Fargo Securities. “Virtually all of the [2018 Q4 Tobacco Talk Survey] respondents expect a list price increase to be led by Philip Morris USA in March.”

Not only are fewer people smoking, some smokers are switching to e-cigarettes or vaping, or dividing their tobacco dollars between combustible cigarettes and these devices.

“We are continuing to see a slow migration to Juul and other vaping devices,” noted Sean Bumgarner, vice president for Ozark, Mo.-based Scrivener Oil Co., which owns and operates the Signal Food Stores convenience chain.

C-store smokeless sales have had ups and downs in recent years.

In 2017, the smokeless tobacco category sustained a substantial hit when Altria Group issued a nationwide recall for some of its most popular brands, including Copenhagen and Skoal.

Fast forward to 2019 and the category is still standing on unsettled ground. Smokeless tobacco sales have climbed back up, but remain below pre-recall levels.

According to the Wells Fargo Securities’ 2018 Q4 Tobacco Talk Survey, convenience store owners and operators were less optimistic for growth through last year than they were for 2017, and notably less than in 2016. In the 52 weeks preceding March 2018, three companies—Altria Group Inc., British American Tobacco and Swedish Match—accounted for about 98% of U.S. dollar sales of smokeless tobacco.

There are multiple factors at play, including state and local regulations. Minnesota is a prime example. Last summer, Minneapolis implemented a ban on mint and wintergreen smokeless tobacco products from any retailer except tobacco shops and licensed liquor stores. Several other cities in the Gopher state have passed similar bans, creating a noticeable shift for the other tobacco product (OTP) segment.

C-stores in the state have been affected in varying degrees.

“We are a small chain, and 40% of our locations are affected by the menthol ban. These locations are seeing high double-digit declines. The remaining locations are up double digits if they border Minneapolis or flat if they are located in second-ring suburbs,” said Madalena Morgan, director of convenience store operations for Bobby and Steve’s Auto World, a chain headquartered in Minneapolis.

Massachusetts is another state struggling with a variety of municipal regulations for other OTPs, in addition to a high tax base.

“Massachusetts has a 210% excise tax rate, so we stay flat or slightly down. I do have two stores in New Hampshire that do better. They are up slightly in all styles and brands,” said Anna Bettencourt, senior category manager for Verc Enterprises. The company operates 24 stores. 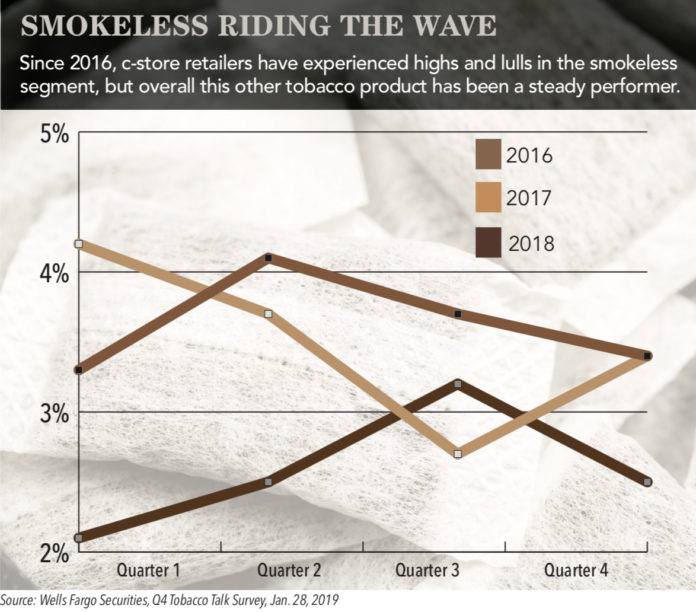